How to Host a QR Code Scavenger Hunt

This post may contain Amazon or other affiliate links. If you purchase something through the link, I may receive a small commission at no extra charge to you.

Every year, I enjoy going overboard planning fun, themed birthday parties for my girls.  Twice a year, I get to play party planner (the profession I thought I wanted to be when I was growing up!).

This year my oldest daughter turned 13.  The days of the cute themed parties were no longer appealing to the teenager, so I had to get creative.

I created a citywide scavenger hunt for her and a few friends.  Rather than hiding written clues, I hid QR codes.  They had to use their phones to scan the code.  The code would open a link where I had a picture of the next destination.

This party was a huge hit so I wanted to share the details of how I created the QR codes and planned the hunt.  If you have a group of teens or pre-teens looking for a fun activity to do together, I highly recommend this one! 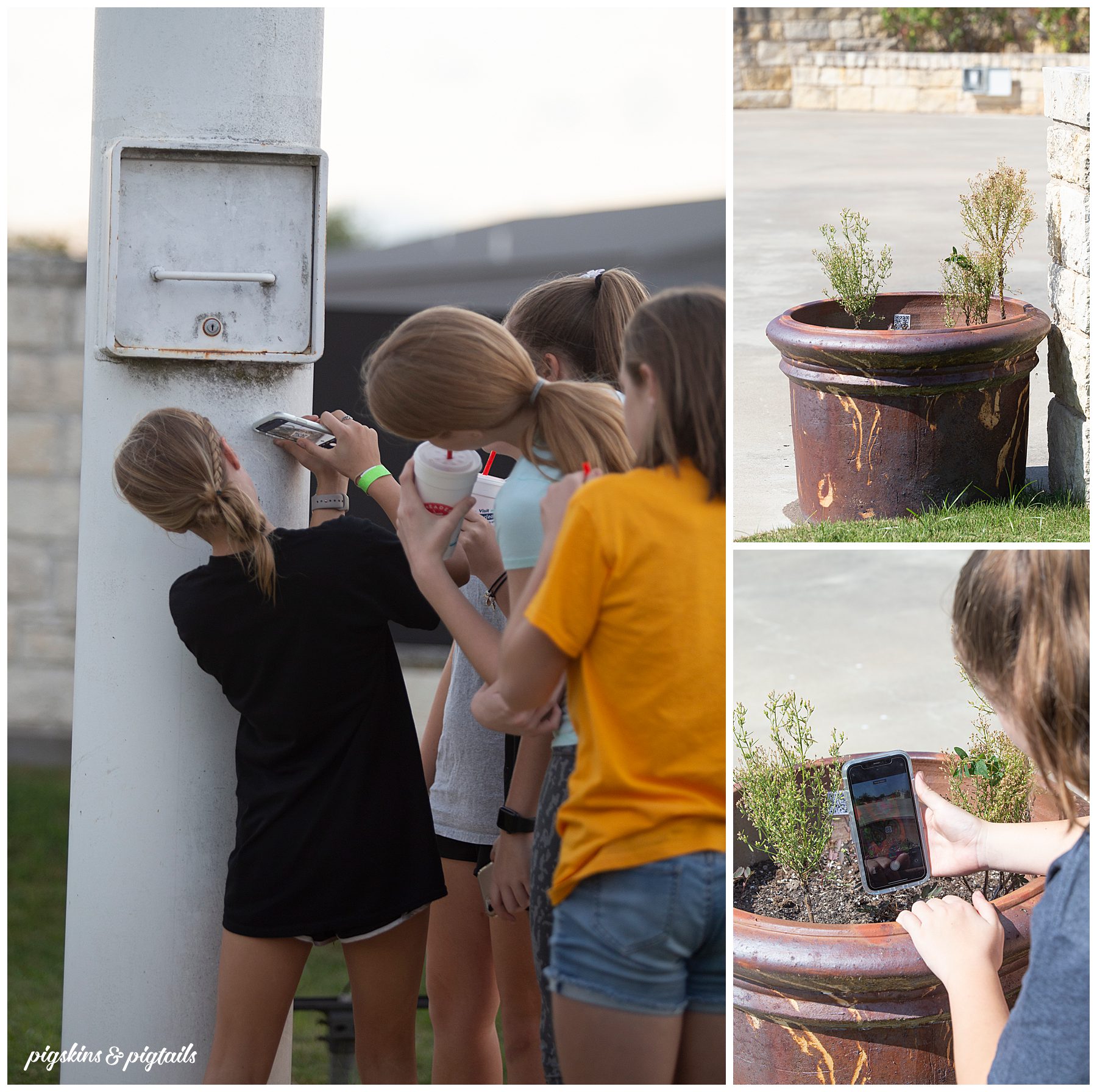 QR Codes can be scanned by most phones without any special apps.  With the iPhone, you just open the camera app and hold your phone over the QR code.  It will pop up a message asking if you want to open Safari.  Click on this banner and it will load your photo!

I taped the first QR code to the car window.  When we were ready to start, I told them their first clue is at the car.

When they scanned this QR code, it opened a photo of the city Welcome sign.  We all hopped in the car and headed to the welcome sign.

Inside one of the letters of the welcome sign, they found the next QR code leading them to the school playground.

I had 13 stops total.  It took about an hour and a half to complete which was the perfect length.  You may want more/less stops depending on how far apart your clues will be. 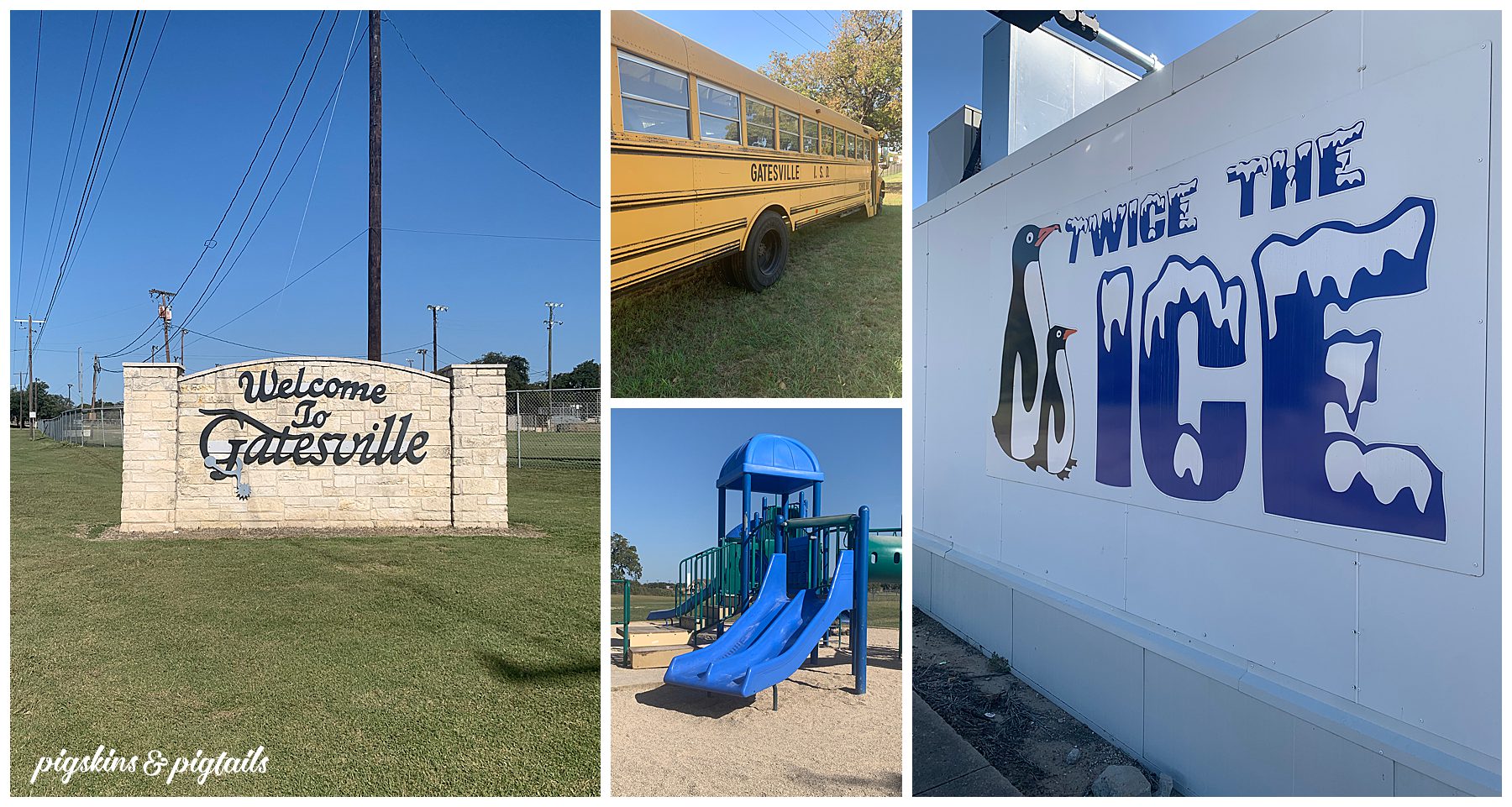 How to Setup the QR Code Scavenger Hunt

Because of COVID, I wanted to make sure all of our stops were outdoors where we wouldn't run into any groups of people.  I also planned for stops where we could safely pull over and they could all jump out of the car.  I knew they would be running to find the next clue so I wanted spots that weren't going to have any traffic.

Upload your photos to Dropbox or Amazon photos

You can use any site that will allow you to generate a direct link to that photo.

You are going to need a link like https://www.dropbox.com/s/lkasjioflkasd/photo1.jpg or https://www.amazon.com/photos/shared/alkjlkjl.  These links can easily be generated after you upload to one of these services.

In Dropbox, right click on an individual photo and choose Share.  In the pop up window, choose Create Link.  Copy this link.

Paste each link into the QR Code Generator

I used the website: goqr.me – it's a free QR Code Generator. Choose the URL icon and paste your link to your first photo.  This will generate a QR code for that photo.

Repeat the process until you have a QR code for each photo. 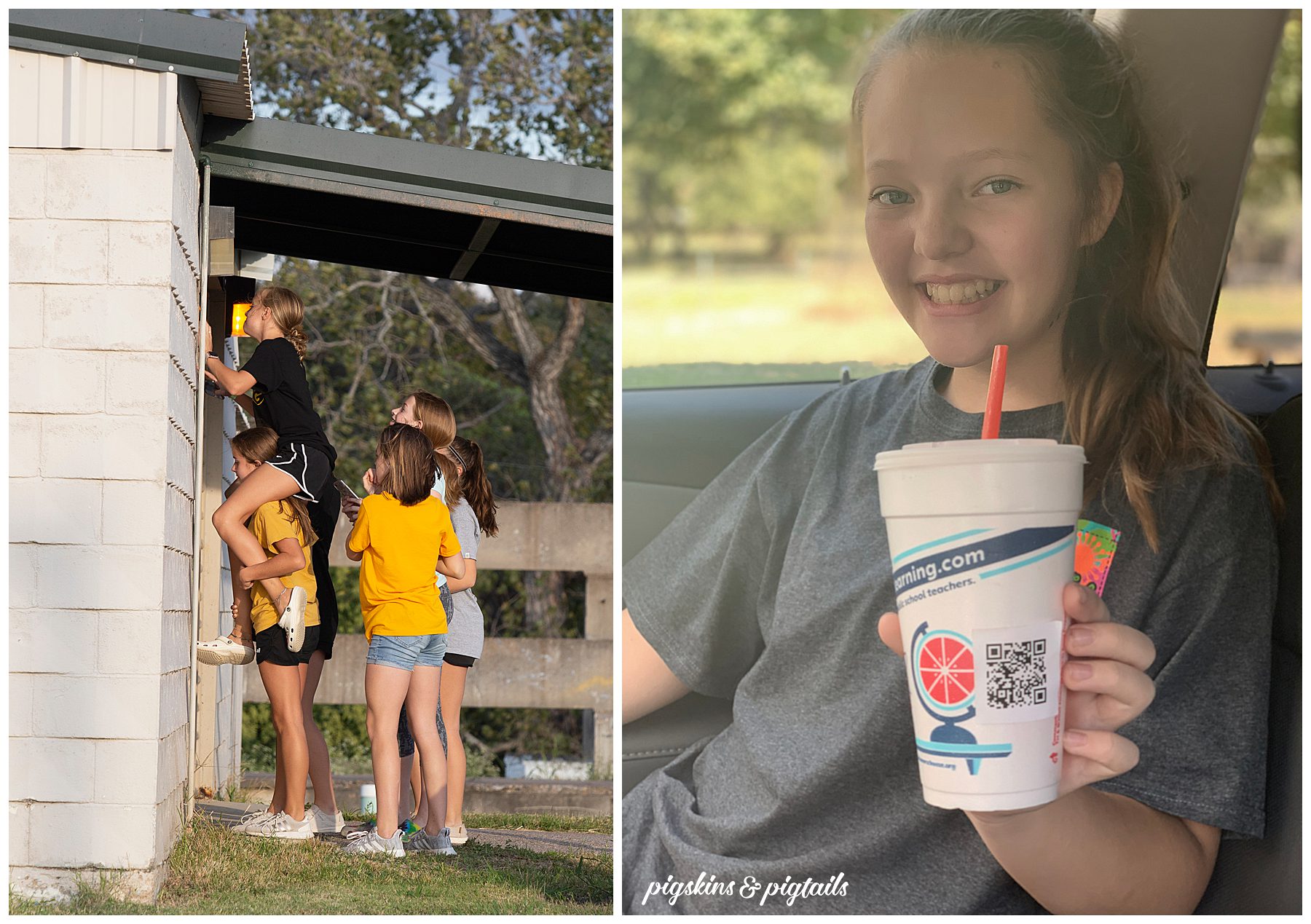 I used a Word document to layout my QR codes and put them in the order I wanted the scavenger hunt to go.

Print and Hide your QR Codes

I printed my Word document and cut out the codes as I hid each one around town.  Be sure to hang onto the first code.  That's the one you will give them to start the game.  I hid the first code on the car.

Each code will lead to the next location, so keep your codes in order as you hide them.

The very last photo was a location in our house.  After returning to the house, this is where they found their prize. 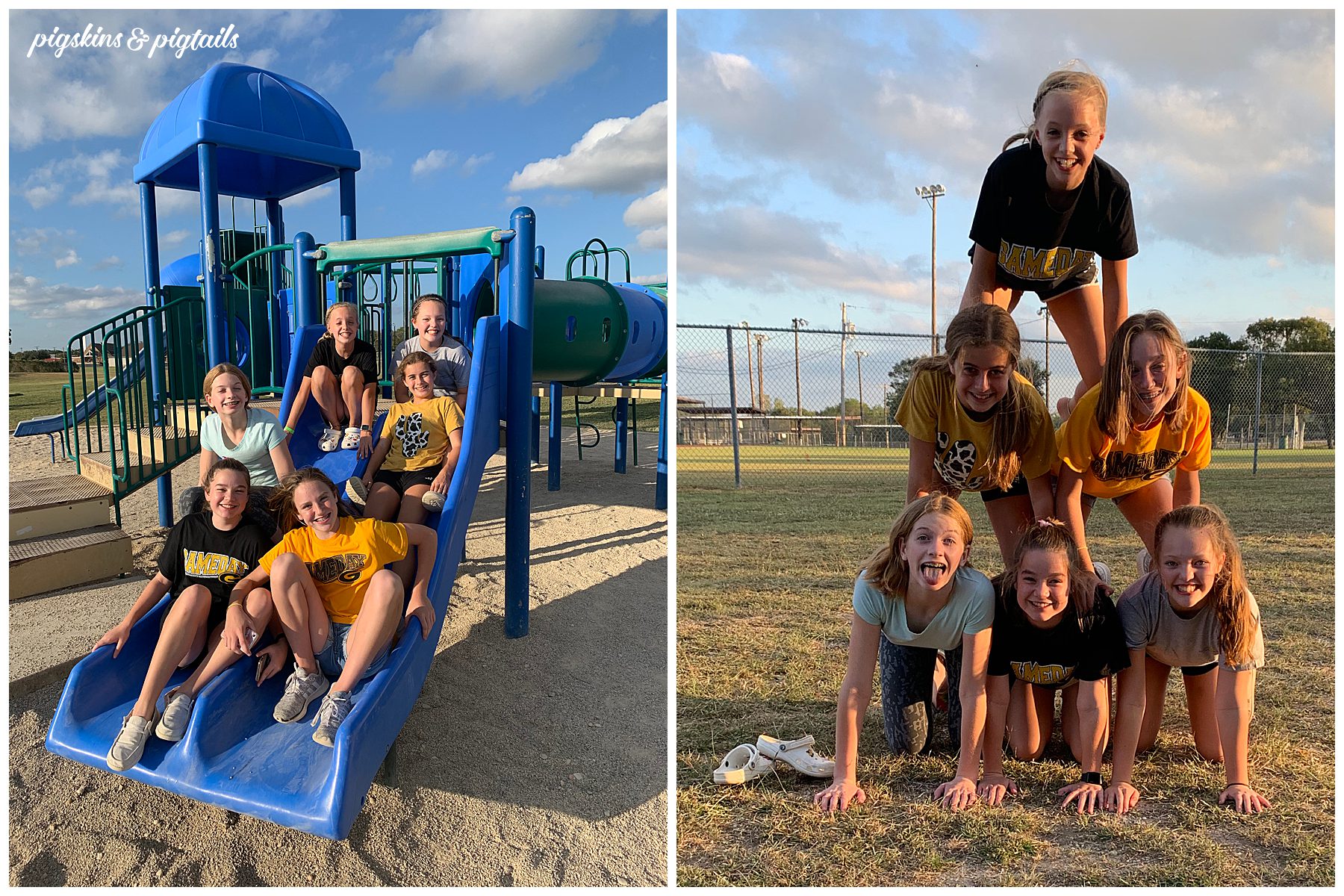 Fun Photo Ops Along the Way

A few of the stops included a “Road Block”.  This as an extra challenge they had to perform before getting their next QR code clue.  The challenges included:

I wanted to make sure we had a few group photos along the way and these Road Blocks made for good photo ops.  Although, the girls decided on their own to take a selfie at each stop anyways, so we got lots of photos!

I created these Road Blocks in Photoshop (you could use Word or screen shot a note on your phone).  I saved them as JPEGs and uploaded them along with the photos. 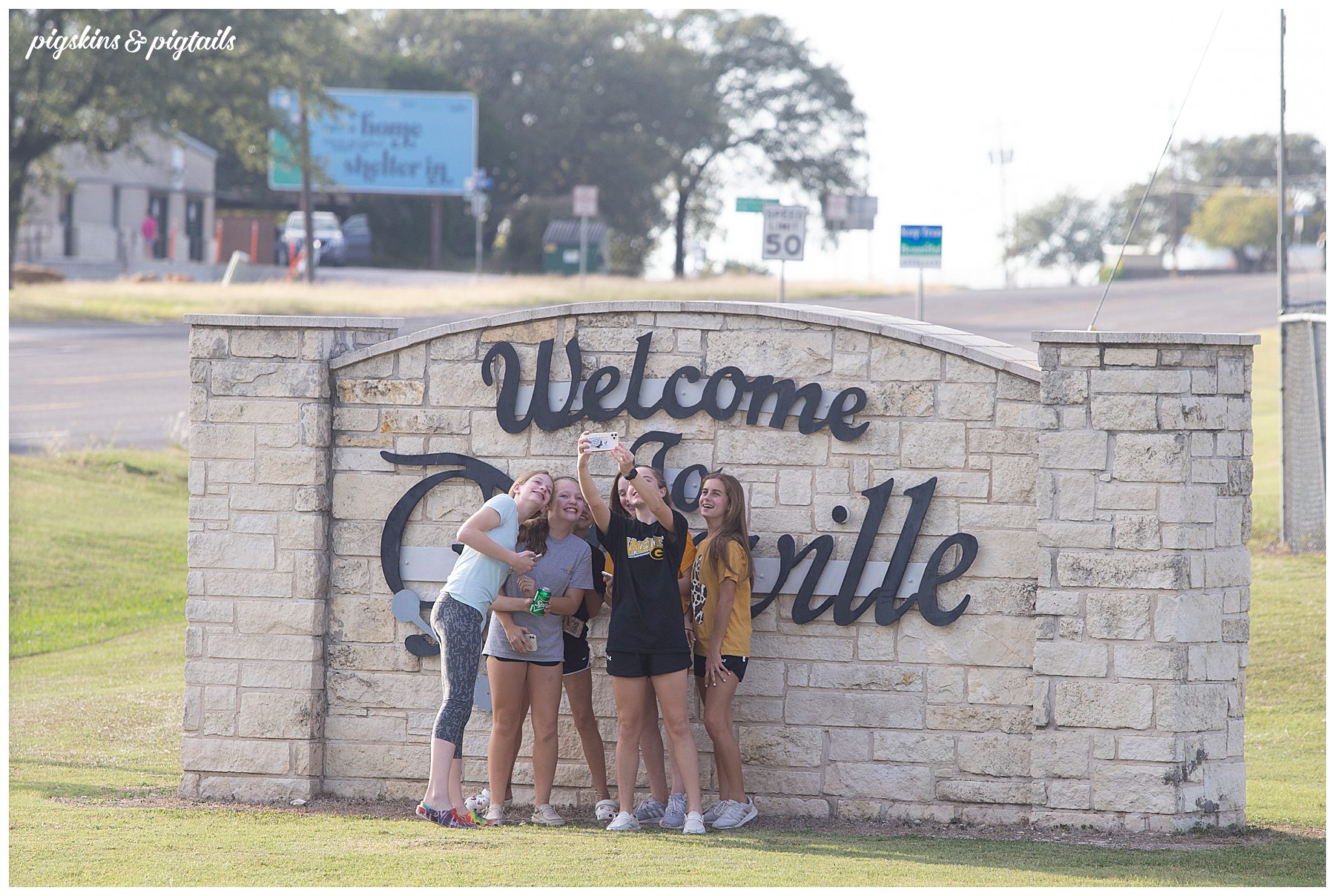 The photo clues led us to the slide at the school playground, an empty bus parked outside the elementary school, the Ice Machine, an old pay phone, high school football field, the huge Texas flag outside of the bank, crosses at a church, city pool, Sonic, and bridge in the park.

You can get creative with this and make your photo clues as hard or easy as you'd like.  For older kids you can take closeup photos of locations and objects around town to make them really analyze the photo.  For younger groups, you can take photos of locations they would be familiar with like school playgrounds and landmarks you drive by frequently.

A Few Tips for Organizing Your Scavenger Hunt 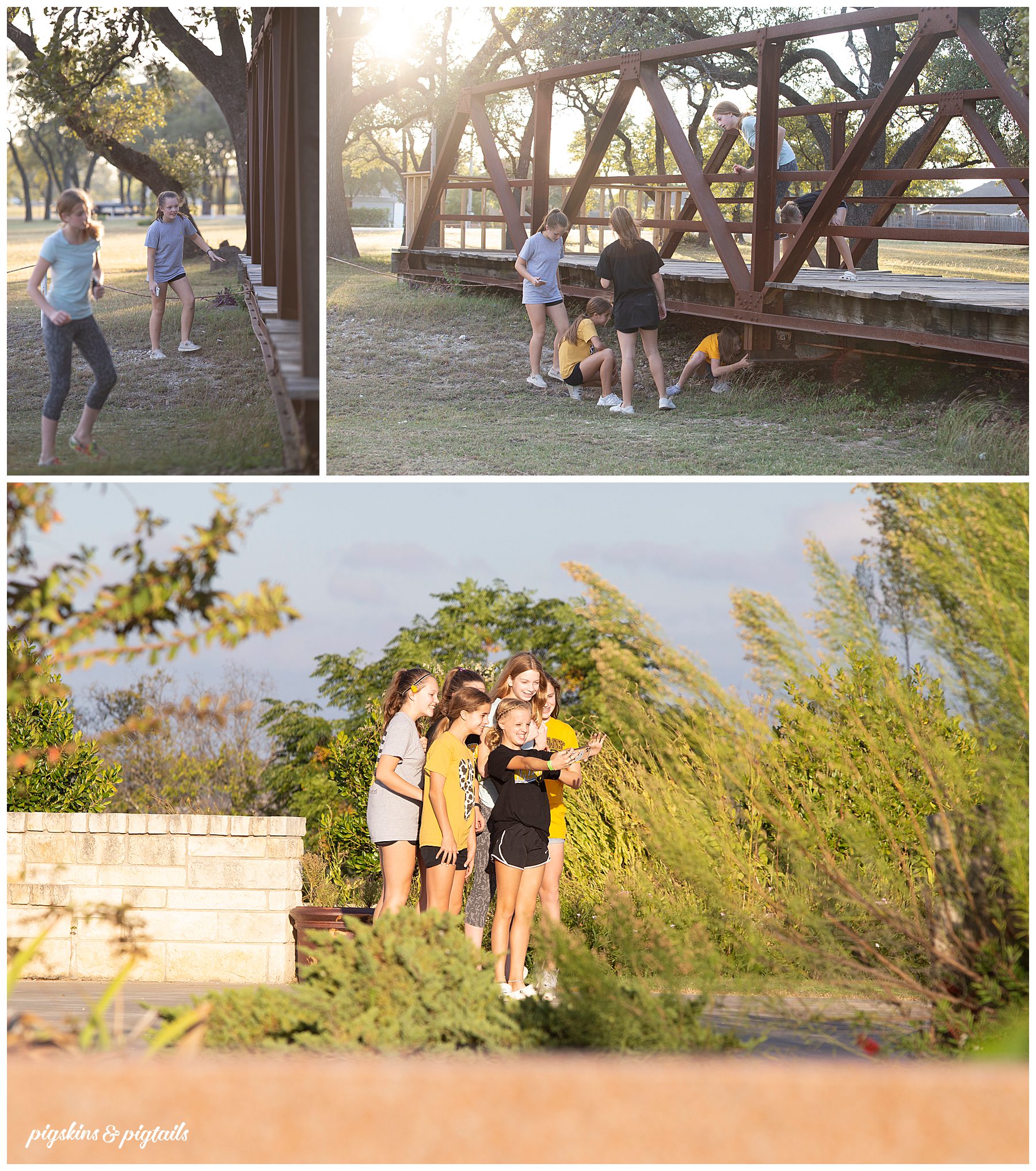 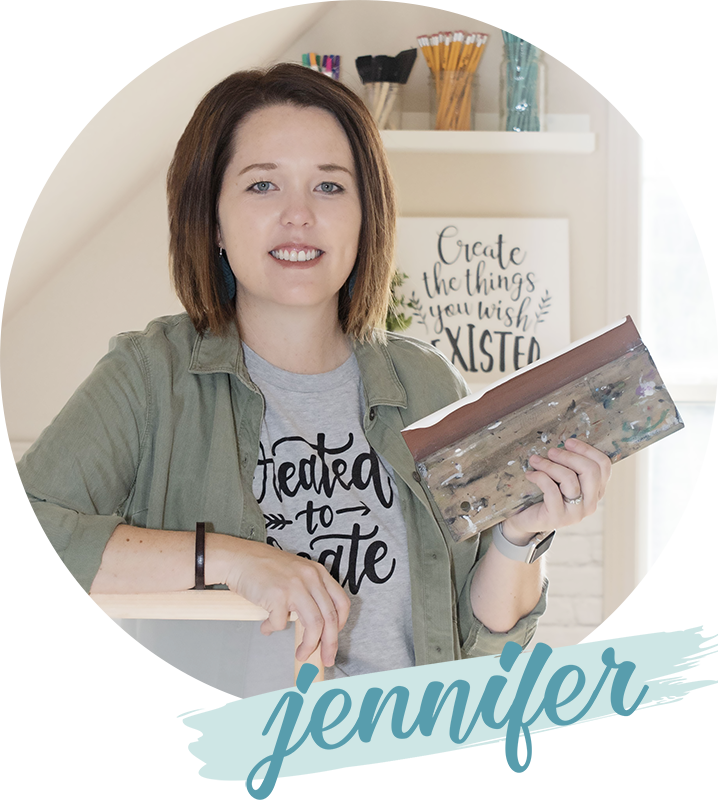 Want to get the latest screen printing tips and tricks delivered to your inbox?

Join my email list and be the first to know about new techniques and project ideas!

Want to join me for a virtual screen printing less

A week from today I'll be headed to Fort Worth wit

I have enjoyed sharing my love for screen printing

Did I catch ya scrolling? 🤣 I'm off to my craft

A year ago, I shared a screen printing project tha

3 weeks from today I’ll be hanging out here teac